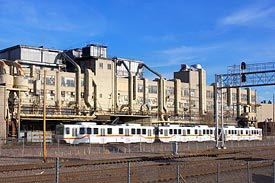 The Gates Rubber Company redevelopment project in Denver was the subject of a CBA finalized in 2006. Located on a fifty-acre brownfield in downtown Denver, the developer, Cherokee, plans to demolish the abandoned rubber plant and clean up the site. In its place, an eight million square foot residential and retail center will be built. A coalition of community and labor groups was organized by the Front Range Economic Strategy Center (FRESC) to participate in the negotiations, which lasted for more than three years. Among the provisions of the agreement are benefits related to affordable housing, living wages for construction jobs, first-source hiring and continued communication between the developer and the community concerning the site’s clean-up. The developer also agreed not to allow any big-box stores to be included in the redevelopment. In exchange for these benefits, the developer was supported by the community in seeking $126 million in city subsidies.

During the negotiation process, it became clear that contaminants from the site had leached into neighboring areas. Because of this, members of the coalition formed the Voluntary Cleanup Advisory Board, and with the developer’s help, they tested neighborhoods adjacent to the factory for environmental contamination. The developer has agreed to make documents related to the site’s cleanup available to residents at a local library.

FRESC summarizes the CBA's provisions as including:
As of early 2008, construction had begun on one parcel at the site, which will have more affordable housing than originally planned. Demolition of the factory has been delayed due to issues related to the site's contamination, but may start late this year.
The text of Gates-Cherokee CBA is available here, and more information about the community benefits not included in the CBA is located here. Also, check out FRESC's website. Cherokee's website has more information about the project and what it has done to involve the community in the planning process.
Posted by amy lavine at 4:22 PM

Interesting... I was searching this info for my uncle. He will be happy for such a great info. Thanks for sharing...
Ana

This is a good initiative to form the Voluntary Cleanup Advisory Board :)

Wow! You are the best. Thank you so much for sharing this invaluable info!
Smiles to you,
Chiara

INTERNATIONAL CONCEPT OF WORK FROM HOME
Work from home theory is fast gaining popularity because of the freedom and flexibility that comes with it. Since one is not bound by fixed working hours, they can schedule their work at the time when they feel most productive and convenient to them. Women & Men benefit a lot from this concept of work since they can balance their home and work perfectly. People mostly find that in this situation, their productivity is higher and stress levels lower. Those who like isolation and a tranquil work environment also tend to prefer this way of working. Today, with the kind of communication networks available, millions of people worldwide are considering this option.

Women & Men who want to be independent but cannot afford to leave their responsibilities at home aside will benefit a lot from this concept of work. It makes it easier to maintain a healthy balance between home and work. The family doesn't get neglected and you can get your work done too. You can thus effectively juggle home responsibilities with your career. Working from home is definitely a viable option but it also needs a lot of hard work and discipline. You have to make a time schedule for yourself and stick to it. There will be a time frame of course for any job you take up and you have to fulfill that project within that time frame.

There are many things that can be done working from home. A few of them is listed below that will give you a general idea about the benefits of this concept.

Baby-sitting
This is the most common and highly preferred job that Women & Men like doing. Since in today's competitive world both the parents have to work they need a secure place to leave behind their children who will take care of them and parents can also relax without being worried all the time. In this job you don't require any degree or qualifications. You only have to know how to take care of children. Parents are happy to pay handsome salary and you can also earn a lot without putting too much of an effort.

Nursery
For those who have a garden or an open space at your disposal and are also interested in gardening can go for this method of earning money. If given proper time and efforts nursery business can flourish very well and you will earn handsomely. But just as all jobs establishing it will be a bit difficult but the end results are outstanding.

Freelance
Freelance can be in different wings. Either you can be a freelance reporter or a freelance photographer. You can also do designing or be in the advertising field doing project on your own. Being independent and working independently will depend on your field of work and the availability of its worth in the market. If you like doing jewellery designing you can do that at home totally independently. You can also work on freelancing as a marketing executive working from home. Wanna know more, email us on workfromhome.otr214425@gmail.com and we will send you information on how you can actually work as a marketing freelancer.


Internet related work
This is a very vast field and here sky is the limit. All you need is a computer and Internet facility. Whatever field you are into work at home is perfect match in the software field. You can match your time according to your convenience and complete whatever projects you get. To learn more about how to work from home, contact us today on workfromhome.otr214425@gmail.comand our team will get you started on some excellent work from home projects.


Diet food
Since now a days Women & Men are more conscious of the food that they eat hence they prefer to have homemade low cal food and if you can start supplying low cal food to various offices then it will be a very good source of income and not too much of efforts. You can hire a few ladies who will help you out and this can be a good business.

Thus think over this concept and go ahead.

There a place to see any upcoming initiatives that are similar in nature? I'm curious to see how things have progressed.