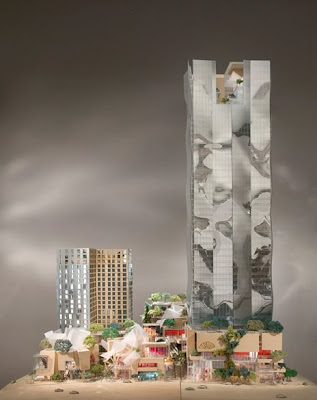 The 3.6 million square foot, $2 billion Grand Avenue project (to be located in downtown Los Angeles near such landmark buildings as the Walt Disney Concert Hall and the Museum of Contemporary Art) will include entertainment facilities, restaurants, 400,000 square feet retail space, a high end hotel, up to 2,600 units of housing, and public park space. Most of the land is owned by either the Community Redevelopment Agency (CRA) or the county, which joined together in 2003 as the Los Angeles Grand Avenue Authority to implement the project. The Authority, with the help of the Grand Avenue Community Benefits Coalition, helped to ensure that the redevelopment will include significant public benefits:
The development is projected to create 29,000 construction jobs, nearly 6,000 permanent jobs, and it's also expected to generate more than $35 million in annual tax revenues. However, it will receive about $95 million in subsidies, and the city and county are also providing nearly $30 million for public improvements and affordable housing (see here). Although there have been questions about whether the project justifies the subsidies, many people see the economic and community benefits as making up for the public expenditures. A broader debate concerns who the project is really aimed at; the public park, for example, has been described as a project "for the wealthy." And Gilda Haas, the executive director of SAJE, has explained that despite the community benefits, "the fact remains that the downtown Los Angeles currently being developed and expanded is not one that primarily reflects the needs or interests of the majority of people who live in Los Angeles. It deserves to be pointed out that the majority of those moving into the 'new' downtown are white and wealthy, while most of the thousands of current residents being displaced are black, Latino, and poor." On the other hand, public officials have responded to the concerns about gentrification raised by projects like Grand Avenue by noting that "if there's no development, there are no benefits."

The project received final approvals in 2007 and is expected to be completed around 2018.

Lots of information about the project is available on the Grand Avenue Committee's website.
Posted by amy lavine at 7:43 PM

packers and movers in mumbai said...


House shifting is very easy with the help of packers and mover.Thanks for sharing this post.
Packers And Movers Kalyan

You have done a very tuf job. Thank you.
Packers And Movers Airoli


Packers and movers in Bhiwandi


Packers and movers in Kharghar


Packers and movers in Powai