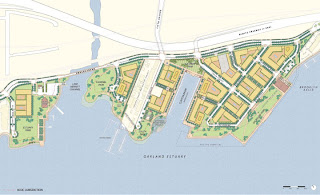 Oakland’s first CBA was finalized in 2006 in relation to the controversial redevelopment of sixty-four acres of waterfront property. Planned for the site are more than 3,000 residential units and a retail complex. The agreement, entered into by the coalition members and the redevelopment agency and incorporated into the development agreement, focuses primarily on affordable housing, and it authorizes injunctive relief to be awarded for noncompliance. While the CBA itself has not been especially criticized, other community groups have separately fought to prevent the development. Environmental advocates who opposed building up the estuarine waterfront collected nearly 20,000 signatures for a referendum to stop the development, and another group has fought to prevent the development from destroying a historic warehouse on the site. These groups have also initiated litigation to prevent the project, and the Oak to 9th Referendum Committee, a group opposing the development, appears to have about as many endorsements as the CBA coalition. Why the community groups supporting increased environmental and historical preservation controls were not part of the CBA negotiations is unclear, but it does seem that the CBA did not adequately address all of the community’s concerns.

The Oak to 9th CBA has not been implemented to date, due to ongoing litigation concerning the development. Meanwhile, Oakland residents are pressing for another CBA to cover a condominum development in the Fruitvale neighborhood.