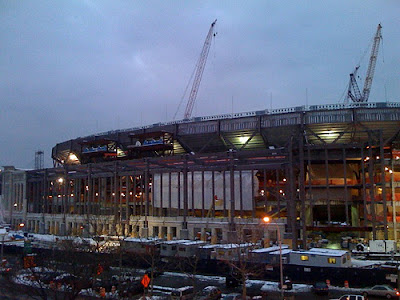 The Yankees have received a lot of attention because of delays in distributing funding under the CBA, but it seems that they have finally worked everything out. A spokesman for the community fund said yesterday that Bronx little league teams and and the City University of New York (CUNY) will be the first recipients of funding. Students from the Bronx will receive a preference in applying for the $50,000 CUNY scholarship. It's not clear yet, however, which little league teams will receive funding and how much they will receive.

The spokesman also denied claims that the distribution of funds under the CBA has been delayed. He attributed the problems to getting charitable tax status and finding suitable candidates for the fund's committee. The fact remains, however, that it's taken nearly two years for this funding mechanism to be implemented. Construction has been ongoing for much of that time as well, meaning that the benefits promised in the CBA have not coincided with many of the impacts of the development on its surrounding area. Quite a few people have characterized this as delay, even if the fund's spokesperson won't.

Now that the fund is up and running, I have a question: how is the community being involved in funding decisions? The community wasn't really included in negotiating the CBA, so is the fund going to be distributed in the same way, without real community input?

For more information on the recent funding decisions, see this article in the Bronx Beat. For the photo, thank jpchan.
Posted by amy lavine at 5:20 AM