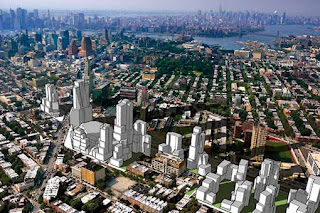 The first New York CBA was completed in 2005 in relation to the multi-billion dollar Atlantic Yards arena project, future home to the New Jersey Nets. In addition to the basketball arena, the project will include an attached residential and office complex to be made up of several high-rise buildings, a development that will radically alter Brooklyn’s skyline. Since its inception, the project has faced broad opposition from Brooklyn residents, primarily because the project is to involve the use eminent domain.

The Atlantic Yards CBA was negotiated by only eight community groups and was purportedly based on the Staples Center agreement. It includes affordable housing, living wage, first source and minority hiring provisions, a commitment to build a day care center and the perk of free basketball tickets for neighborhood residents.

Reaction to the agreement has been decidedly negative, althought there has been some praise for the concessions contained in the agreement. Critics have pointed out that several of the coalition’s member groups were created expressly for the purpose of the negotiating the agreement. And numerous other community groups in fact expressed opposition to the development and to the CBA, claiming that the developer never had any intention of bargaining in good faith. One of the coalition’s member groups also reported that it expects to receive $5 million from the developer, creating a conflict of interest that has clearly tarnished the CBA’s integrity. Additionally, several chairpersons from local community boards protested statements made by the developer that they had played an advisory role in the negotiations. The chairpersons contended, to the contrary, that their involvement with the CBA ended very early in the process and well before a final draft was prepared. A representative of Good Jobs New York also expressed serious misgivings about the CBA, claiming that the negotiations were “marked by secrecy” and that they “contributed to a fragmentation of community responses.”

The fundamental problem with the Atlantic Yards CBA is that it is not representative of the community. A significant portion of Brooklyn residents are opposed to the project due to the extensive impacts that it will have on Brooklyn, and they were not invited to participate in negotiations. Rather, the talks were led by community members already on the developer’s side. It can only be guessed what the CBA would have looked like had inclusive and transparent talks actually been held. Without input from the stakeholders who had the most concerns about the project’s effects on the community, however, common sense would suggest that the CBA is weaker than it otherwise would have been. Interestingly, another Brooklyn community group lobbied the developer to reopen the CBA for further negotiations in 2006. The developer refused, but offered instead to consider a second agreement to be called a “Neighborhood Benefits Agreement.” Little seems to have come of this initiative, however.

Construction of the Atlantic Yards arena has been significantly delayed by litigation, and the major provisions of the CBA have thus yet to be implemented. The developer did advertise that it was seeking an Independent Compliance Monitor in 2007, as required by the CBA, but some have questioned just how independent the monitor will be. One upside of the situation is that with so many people opposed to the project and the manner in which the CBA was made, there will likely be heightened public scrutiny of the developer’s compliance with its agreements. Moreover, fears that the Atlantic Yards CBA will establish “bad precedent” for future CBAs have died down somewhat. The Atlantic Yards CBA has been so thoroughly criticized (see here and here) that other New York CBA negotiators have expressly chosen to avoid “the Brooklyn model.”

This is a very amazing post for cheap web hosting services. in this post, you have provided all the basic information regarding.

Comfortabl y, the post is really the freshest on that deserving topic. I harmonise with your conclusions and definitely will thirstily look forward to your next updates.

Thank you for the link building list.I am going jot down this because it will help me a lot.Great blog! Please keep on posting such blog.

Oflox Is The Best Website Design Company In Dehradun

Great deals of important information and also a great article. I am currently following for your blog site and I am bookmarking it future reference. thanks for sharing!
Best School Management Software