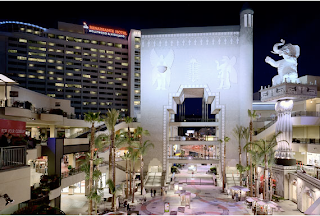 The first CBA was negotiated in 1998 in relation to the planned development of the Hollywood and Highland Center, home to the theater that now hosts the annual Oscar ceremonies. The development, which includes more than 4,000 theater seats, several parking lots and hotels, and 1.2 million square feet of retail space, was projected to cost $388 million. At eight and a half acres, the project understandably sparked concerns among Hollywood residents and business owners that traffic and congestion would be increased, there might be environmental and aesthetic effects, and that crime rates might go up. With the help of Los Angeles Councilwoman Jackie Goldberg and the Los Angeles Alliance for a New Economy (LAANE), the developer agreed to a deal with community groups: in exchange for their support, the developer offered to finance traffic improvements, ensure that workers at the center would be paid a living-wage and implement a first-source hiring plan and a policy of union-neutrality. The deal, though, was not one-sided; community support of the development helped the developer to obtain $90 million in subsidies from the city.

By most accounts the project has been a success: in addition to revitalizing Hollywood Boulevard, nearly seventy percent of the initial employees hired at the complex were recruited from the immediate area and about half of the permanent positions provide living-wages. In 2004, LAANE reached another CBA for a development just down the street from Hollywood and Highland. The benefits package for the Hollywood and Vine mixed-use, transit-oriented development included similar living wage, affordable housing and job training provisions.
Posted by amy lavine at 9:11 PM

I never knew what went into the decision making process of building a new complex like the one at Hollywood and Highland. It really does provide a lot of employment opportunities. There might be more available now that the complex/Renaissance hotel is opening a new spa, Spa Luce. There might be more information about it on their website at www.spaluce.com