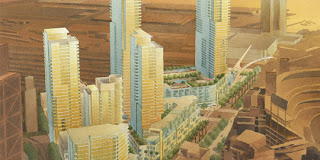 In September 2005, a broad coalition of twenty-seven housing, labor, community, environmental, and religious groups negotiated San Diego’s first CBA with developer JMI/Lennar in relation to Ballpark Village, a seven-acre project with 3.2 million square feet of offices, residences and retail space. The CBA negotiations were held in private and were not made public until just hours before the city council was to vote on the project’s master plan. By this time, the developer had been working on a deal with the local redevelopment agency for nearly two years, and the last minute change in plans provoked criticism that it “circumvented the process.” Moreover, the new agreement called for significant changes to be made to the proect’s affordable housing component. Although it called for more units, none of them were to be inclusionary units located-on site, as the agreement with the redevelopment agency had required. A revised version of the CBA that incorporated some aspects of the original affordable housing plan was eventually approved, and the CBA, as a whole, has been viewed positively. The agreement set out a range of community benefits, including:

Hi
I read your post and it contains very useful information. Thanks for this useful article.