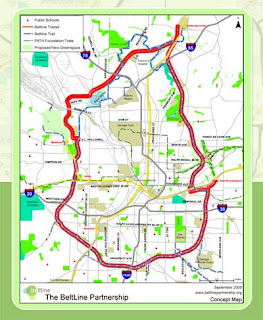 The Beltline project, an initiative of the Atlanta Development Authority, involves the development of a 22-mile light rail transit loop around the city of Atlanta. The transit component of the project will include multi-use trails, sidewalks, streetscapes and road improvements, providing alternative transportation options and transit oriented design for a city known widely for its sprawling habits. The $2.8 billion project will also incorporate green space, affordable housing, brownfields remediation, historic preservation and public art. Over the next 25 years, the project is expected to generate billions of dollars of economic development and create tens of thousands of construction and permanent jobs.

In order to finance the Beltline, the city of Atlanta established a 6,500 acre tax allocation district (TAD) in 2005. (Funding is also being provided by private donations and federal programs.) Most of the properties within the TAD are underutilized, and as they are developed, their property taxes will increase. The TAD functions by diverting the difference between the baseline taxes and the increased taxes (sometimes called the "tax increment") to repay the municipal bonds issued to finance the Beltline. For a more detailed explanation of the TAD process, see here. (And for more background on this financing mechanism, including the problems it may create, see here.) In addition to funding the Beltline itself, TAD proceeds will also be used to provide economic development and affordable housing incentives.

The Beltline project has been received with enthusiasm, but it has also generated concerns about gentrification and the displacement of current residents. The 2005 city resolution creating the Beltline TAD responded to these concerns, recognizing "the importance of balanced and equitable development of the city in a manner that preserves the dignity of existing residents and ensures equal participation by all residents in the many benefits, direct and indirect...of the Beltline project" (p. 3). Importantly, the law also contained a community benefits provision (section 19):

The capital projects that receive funding from TAD bond proceeds shall reflect, through the development agreements or funding agreements that accompany such projects, certain community benefit principles, including but not limited to: prevailing wages for workers; a 'first source' hiring system to target job opportunities for residents of impacted low income 'Beltline' neighborhoods; establishment and usage of apprenticeship and preapprenticeship programs for workers of impacted Beltline neighborhoods. A more complete list of such principles and a community benefit policy shall be developed with community input and included within the agreements to be approved by City Council.

This provision ensures that community benefits will be included in numerous individual Beltline developments, similar to the Park East redevelopment legislation in Milwaukee that made CBA provisions mandatory for developments of county-owned land.

Because separate community benefits packages will be developed for individual Beltline projects, continued community involvement is especially important. While there is no Beltline CBA coalition, the project is being managed in such a way as to provide enhanced opportunities for public input.

Atlanta Beltline Inc., an affiliate of the Atlanta Development Authority tasked with planning and implementing the Beltline project, has developed a community engagement framework to keep residents informed and engaged in the Beltline's creation. The framework consists of the Tax Allocation District Advisory Committee, the Beltline Affordable Housing Advisory Board, quarterly public briefings made by Atlanta Beltline Inc., a community engagement advocate, and 5 study groups that seek to receive public input on the project (meeting minutes and briefings are available here).

Like most large projects, the Beltline has had its share of problems in getting off the ground. In 2008, the Beltline was almost derailed by a Georgia Supreme Court decision that prohibited school district tax funds from being included in the TAD (Woodham v. City of Atlanta), but a referendum (Amendment 2) was passed several months later to amend the state constitution and overrule the court. In June, 2009, the Atlanta Development Authority and the Atlanta Public Schools reached an agreement on the financing and the disposition of the $18 million in TAD funds raised since 2005.

Another hitch in the project came in January, 2009, when the Georgia Department of Transportation and Amtrak teamed up in a last minute move to acquire some abandoned railroad tracks needed for the Beltline. The national rail corporation wanted the tracks for a regional heavy rail line running from New York to New Orleans, but after strong public protest, GDOT's board voted to retract its objection to the Beltline project. In July, GDOT and Atlanta Beltline Inc. reached a deal giving the Beltline exclusive control of the tracks until 2012. The agreement brought the Beltline up to almost 50% of its needed acquisitions, well ahead of schedule.

The Beltline's official groundbreaking came on February 23, 2008, with city leaders ceremoniously shoveling dirt from the site of a future bike path in the city's West End. A park project in the Fourth Ward was kicked off in December. According to the Atlanta Beltline 5-year Work Plan, by 2011 the Beltline should have acquired 10 new parks, constructed two portions of the trail system, prepared the right of way for rail construction, completed master planning, provided $19 million in economic development incentives and $42 million in affordable housing incentives, and invested $21 million in road, bicycle and pedestrian improvements.

In June, 2009, the U.S. Environmental Protection Agency awarded a $1 million grant to the city Atlanta for brownfields cleanup along the Beltline. The grant money will be used to seed a revolving loan fund, which is expected to fund the remediation of 10-15 sites.

Hello Everybody,
My name is Mrs Sharon Sim. I live in Singapore and i am a happy woman today? and i told my self that any lender that rescue my family from our poor situation, i will refer any person that is looking for loan to him, he gave me happiness to me and my family, i was in need of a loan of S$250,000.00 to start my life all over as i am a single mother with 3 kids I met this honest and GOD fearing man loan lender that help me with a loan of S$250,000.00 SG. Dollar, he is a GOD fearing man, if you are in need of loan and you will pay back the loan please contact him tell him that is Mrs Sharon, that refer you to him. contact Dr Purva Pius,via email:(urgentloan22@gmail.com) Thank you.

Hello Everybody,
My name is Mrs Sharon Sim. I live in Singapore and i am a happy woman today? and i told my self that any lender that rescue my family from our poor situation, i will refer any person that is looking for loan to him, he gave me happiness to me and my family, i was in need of a loan of $250,000.00 to start my life all over as i am a single mother with 3 kids I met this honest and GOD fearing man loan lender that help me with a loan of $250,000.00 SG. Dollar, he is a GOD fearing man, if you are in need of loan and you will pay back the loan please contact him tell him that is Mrs Sharon, that refer you to him. contact Dr Purva Pius,via email:(urgentloan22@gmail.com) Thank you.

Community ownership, or at the very least, appreciation of the rationale for a particular decision, is another long argued reason for good community involvement in decision-making processes.
Benefits of Community Engagement

I have being hearing about this blank ATM card for a while and i never really paid any interest to it because of my doubts. Until one day i discovered a hacking group called dark web, they are really good at what they are doing. Back to the point, I inquired about The Blank ATM Card. If it works or even Exist. They told me Yes and that its a card programmed for random money withdraws without being noticed and can also be used for free online purchases of any kind. This was shocking and i still had my doubts. Then i gave it a try and asked for the card and agreed to their terms and conditions. Hoping and praying . Few days later i received my card and tried with the closest ATM machine close to me, It worked like magic. I was able to withdraw up to $5,000. This was unbelievable and the happiest day of my life with my Family. So far i have being able to withdraw up to $50,000 without any stress of being caught. I don’t know why i am posting this here, i just felt this might help those of us in need of financial stability. email Mr Rex via rexwalkerhacker@gmail.com

Do you need a business loan ?? apply now
We are lending organization and had the highest profit in the lending sector and as part of our humanitarian services we are offering out loans to all locations with 3% interest rate ,if interested apply now and do business with the right people contact us via Email: infoloanfirm8@gmail.com even Blacklisted can apply for the loan