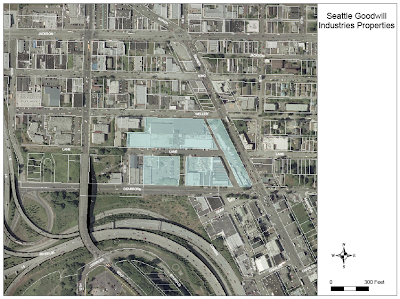 The Dearborn Street Coalition was formed in 2006 to ensure that development in Seattle's Little Saigon area and neighboring areas will meet the needs of local residents, small business owners and other stakeholders. With over 40 members in the coalition, it has been seeking to negotiate a CBA involving a large-scale retail and housing complex proposed to be constructed at the intersection of Dearborn Street and Ranier Avenue. The development will encompass an old Goodwill building, and the proposal includes a new Goodwill facility, at least 500 units of affordable and market rate housing, and a significant amount of retail space, including two big box stores, restaurants, a grocery store and smaller retail stores (see here and here for details).

The Dearborn Street Coalition has concerns about a number of the project's likely impacts, such as traffic, parking and the effects of the project on unique local businesses, especially those located in the International District and in Little Saigon. Gentrification and the undermining of regional labor standards are also feared. The Dearborn Street Coalition has warned that the high rents likely to be sought by the regional mall will drive out the area's small ethnic businesses. It is also concerned that the retail jobs offered by the new development will be mostly low-paying and/or part time.

In order to address these impacts, the Dearborn Street Coalition and Puget Sound Sage have been seeking to reach a CBA for the community that will ensure the preservation of Little Saigon's character, provide for the development of adequate affordable housing and lead to the creation of accessible, quality jobs. Unfortunately, the developer has not been particularly interested in negotiating. Another organization, Go Dearborn Street!, has also been formed to support the project. It believes that the project, sans CBA, will provide sufficient affordable housing, create a compact, street-scaled urban area, and that "the project could improve the neighborhood's business climate." While this may be true, a CBA would ensure that the community could enforce the developer's promises.

In order to go forward, the project developers need to secure a rezoning to allow large-scale retail stores, in addition to design and environmental approvals. The Department of Planning recently recommended the rezoning from industrial to neighborhood commercial (with a number of conditions), and the City Council will vote on the matter after a public hearing, which will be held on June 9 (see the official notice here).

More information about the project is available here on the city's website, and the draft and final environmental impact statements are available for download here. For news about the Dearborn Street Coalition, make sure to check out their blog.