** This is an updated (and improved) posting. Contact me here to obtain archived posts. **

The 2006 CBA concerning the Gateway Center at Bronx Terminal Market involves the redevelopment of a market center originally built in the 1920s. Throughout its history, the market housed a variety of small local vendors, and in the 1990s it became known for its ethnic food products. But in its older years, the “market became mired in endless litigation with city attorneys pushing the landlord for repairs.” To some, the area had become blighted. 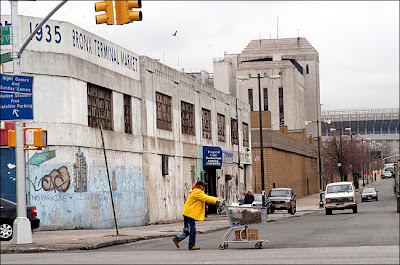 The Related Companies acquired a lease for the property in 2004 and shortly thereafter began discussions about redeveloping the property with the New York City Economic Development Corporation and the Bronx Overall Development Corporation. The Related Cos. received approval for its Gateway Center mall development project on February 1, 2006, with almost unanimous support from the city council. Covering both the market site and the adjacent Bronx House of Detention site, the new Gateway Center will have about 1 million square feet of retail space, with one of the original buildings being preserved and rehabilitated. The second phase of the project will include a new hotel, and the development will eventually be complemented by a public waterfront park. Supporters of the project see a bright future:

By all accounts, the redevelopment of the Bronx Terminal Market should contribute to the resurgence of the Bronx and the revitalization of the immediate neighborhood. The Gateway Center at Bronx Terminal Market should be a powerful magnet that should encourage other businesses to invest and should also provide a modern, attractive, environmentally-friendly design that should beautify the area.

A CBA for the project was signed on February 1, 2006 (unsearchable final copy, searchable execution copy). Adolfo Carrion, the Bronx Borough President at the time, was instrumental in completing the agreement. (Mr. Carrion is now the Director of the White House Office of Urban Affairs Policy.) The CBA includes a variety of benefits: 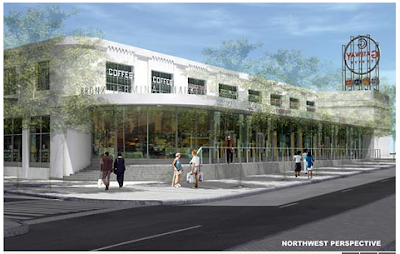 Reaction to the CBA

The Gateway Center CBA has been faulted on a number of grounds.

Most importantly, the negotiation process did not truly involve any grassroots community organizations. Although eighteen groups representing various interests were selected by the Borough President to participate in a CBA "taskforce," they were given only about a month to prepare a draft CBA and were not given any assistance in the process. Evidently, this resulted in many of the community groups having little influence in the actual negotiations. When the organizations received copies of the completed CBA, only three of them signed the agreement, while at least seven refused to do so. The Neighborhood Retail Alliance explained a number of other problems with the negotiation process:

Normally CBAs are negotiated prior to the land use review process so that community coalitions can have leverage over developers. The opposite occurred with the Gateway CBA. Brainstorming for the document only began in November after City Planning Certification, Community Board approval, and the Borough President’s “Yes” vote. The agreement was finalized two days prior to the City Council’s approval.
....
Unknown to the participants, representatives from Related were in the room while the taskforce brainstormed

The taskforce never negotiated directly with Related. Final negotiations occurred between Bronx elected officials and the developer. For this reason the final CBA is a very watered down version of what the community asked for.

Most of the City Council never had the chance to read the CBA. The final copy was sent to the Council the morning of the project’s approval.

A second problem is that the developer will only be fined $60,000 for violating the CBA, with a cap of $600,000 on the amount of fines that can ever be assessed. Aside from the weakness of this penalty provision, CBA proponents have generally recommended that contracts provide for specific enforcement, rather than money damages. As explained by Julian Gross of Good Jobs First (now at the Community Benefits Law Center) in Community Benefits Agreements: Making Development Projects Accountable:

Community groups entering into CBAs can and should have the ability to enforce CBAs against the developer in court. While most contracts have some provisions for recovery of money damages against a party violating the agreement, community groups will generally be more concerned with ensuring that promised benefits are in fact provided. Community groups should therefore ensure that CBAs recognize the right to ask for a court order requiring the developer to honor commitments contained in the CBA.

Other criticisms have been voiced because the amount of retail space reserved for local retailers makes up only a minimal portion of the mall’s square footage (18,000 square feet out of 1 million in the entire development, or about 2%), and because the contracting, hiring and living wage goals are only enforceable as to the positions controlled by Related Cos. The developer's contractors and the Gateway Center's eventual tenants will not be bound by any provisions in the CBA. Moreover, the CBA expires in 2015 (CBA, p. 36), and there is no guarantee that another CBA will be negotiated in relation to the project's second phase.

The Gateway Center is scheduled to open in late 2009, but parts of the CBA have already been implemented.

The City University of New York reported in 2007 that it had received $175,000 from the developer to provide pre-apprenticeship training to Bronx residents.

The first store at the Gateway Center, a Home Depot, opened in May, 2009. Of the 200 jobs, 75% were awarded to Bronx residents. Almost 40% of the project's contracts went to Bronx-based businesses, and more than 10% went to MBE/WBE firms, so Related Cos. met and exceeded the aspirational goals contained in the CBA. Mayor Bloomberg announced that 90% of the project space was leased, with tenants including BJ's, Best Buy, Target, Bed Bath and Beyond, Marshall's, Raymour & Flanagan, Staples and Toys 'R Us. "The Gateway Center at Bronx Terminal Market will make the Bronx a more attractive environment for businesses that will have a positive impact on the borough", Bloomberg said.

No Wal-Marts allowed. Photo credit interloafer, who notes that it was taken on March 21, 2009.

In July, 2009, the Bronx Overall Economic Development Corporation was accused of diverting hundreds of thousands of dollars from the CBA fund set up by Related Cos. A suit has been filed against the agency by the CBA administrator, but the agency denies any wrongdoing and claims that the lawsuit is completely frivolous. [Updated Sep. 2, 2009] Ruben Diaz, the current Bronx Borough President, called for an investigation and full accounting. In September, 2009, he declared that the BOEDC had properly handled the funds, despite the failure to formally account for about $1.6 million. Most of that money apparently went toward payroll expenses for the employees running the Fast Track program.

Better news came in August, 2009, when the Gateway Center's BJ's Wholesale Club announced that it would hold a lottery to distribute the 2,000 reduced price memberships called for in the CBA. The discounted annual memberships are only available for low income Bronx residents, and winners of the lottery will be able to buy them for $20 instead of $45. The lottery application and guidelines are available here.

The Gateway Center has also posted useful information about promised CBA benefits on its website, including ads seeking a childcare provider to rent space at below market rates and information about financial programs available to local firms. Typically, job openings are also posted.

Thank you for your post. This is excellent information. It is amazing and wonderful to visit your site.
best agricultural software supplier
how exchange rates affect agricultural markets