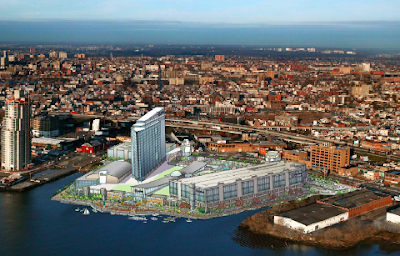 Plans for building new casinos in Pennsylvania have caused quite a stir in recent years (see here for information about the state's Gaming Control Board and here for opposition to the state's gambling policies).
The SugarHouse Casino project

SugarHouse was one of the casinos granted a license in late 2006, after gambling was legalized in the state in 2004. It now has plans to build a casino/entertainment complex on the waterfront in Philadelphia. Much of the opposition to the plans stems from a

nti-gambling sentiments, but other concerns have been raised. The Pennsylvania Historical and Museum Commission, for example, wants a more thorough review of the area, which is believed to include the site of a British fort from the Revolutionary War. And the Mayor of Philadelphia, Michael Nutter, has refused to pay the estimated $14 million in annual policing costs for SugarHouse and Foxwoods, another casino planned for Philadelphia.
The Pennsylvania Supreme Court pretty much approved the SugarHouse project in December 2007, when it held that the City Council's failure to act on its zoning and land use requests amounted to "deliberate inaction." (A similar decision was later issued regarding the other casino proposed for Philadelphia, Foxwoods.) The court ordered the city to designate the site as a commercial entertainment district and to give final approval to the project's development plan. (See this article in the Philadelphia Inquirer for a good summary, or read the whole opinion here.) In January 2008, Mayor Nutter attempted to revoke one of SugarHouse's licenses, claiming that the previous administration had rushed the process to get it approved before Mayor Nutter took office. The Pennsylvania Supreme Court dismissed the city's claims on standing grounds in June, 2009.
Community outreach

While the city was trying to get more control over the casino permitting process, SugarHouse began to campaign for public support. It committed to fund emergency services, use green building techniques, make payments to the city of $67 million over ten years, make sewer improvements, develop a comprehensive transportation plan and an economic opportunity plan (to increase minority and women participation in the casino's construction and operation) and to construct a publicly-accessible waterfront promenade as part of the project.
Despite these promises, a lot of people have negative beliefs about the impacts of casinos, including, in Philadelphia, the community group Casino-Free Philadelphia. As a way of getting additional public support, SugarHouse pledged to enter into a CBA. 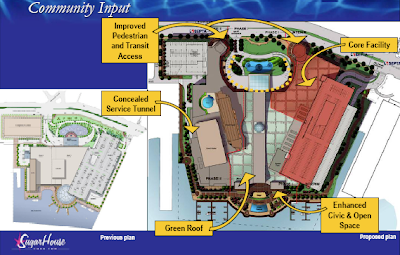 Negotiations were held primarily with two community groups, FACT (Fishtown Action) and New Kensington Community Development Corporation. FACT was labeled as astroturf and "merely a front for SugarHouse", but it's unclear how much of the opposition to the CBA was really motivated by anti-gambling sentiments (rather than concerns about development impacts).
The Special Services District
The SugarHouse CBA is unique in being structured around a nonprofit Special Services District, although the SSD is somewhat similar the LDC that negotiated the Columbia University CBA. The SSD covers Fishtown, Northern Liberties, Old Richmond, and South Kensington, and its mission, as stated in the articles of incorporation, is “to mitigate the impact of Sugar House Casino functions and activities; to address other issues which affect the quality of life within the District; and to engage in any other activities which may lessen community tensions, combat community deterioration and improve the community as a place to live and work....” The District is controlled by seven voting members on its board of directors, all of whom serve without compensation. Voting members may not hold other public offices. These board members are elected by residents of the covered neighborhoods, save for the inaugural board. (The inaugural board members are to be appointed by two of the community groups that were involved in negotiations.) However, there’s also a nonvoting advisory board, made up of local officials.
Information about the SSD board members can be found here.
Interestingly, the Sugar House CBA has an indefinite term. The agreement is also light on consideration. Although the District agreed not to use any funding received by SugarHouse for litigation against the casino, the CBA specifically permits any District member to oppose the project in her individual capacity.
Annual funding
Under the CBA, SugarHouse agreed to provide substantial annual funding to the SSD: $175,000 annually between the project’s approval and opening, and $1 million annually after opening, to be renegotiated after 15 years. The money will be distributed for community programs, but the agreement doesn't include any clear guidelines as to how the money should be spent. The lack of guidelines could be interpreted as nontransparency, but it could also be seen as a way to maintain flexibility in funding decisions.
Other CBA provisions

Links
Posted by amy lavine at 9:42 AM

The links don't work. Please update when you have a chance! I'd like to be able to look at the CBA.

Your publish was extremely published and it reduce large amount of mild on the subject of advantages of enjoying in the internet gambling houses. I would like to encourage people to my gambling house website which is start for everyone and where gambling house gamers can find large rewards and they can also perform for many high jackpots.casino benefits

Good post. Realy you are the top level writer. I need some information about gclub. Have you another blog about this? Please share with me